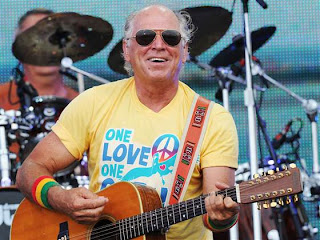 Jimmy Buffett Played Margaritaville & Something ‘Bout a Boat on the Today Show 2013 Jimmy Buffett sang his well known classic Margaritaville today live on the Today Show. As expected, we was well received with thousands of Parrot Heads fans flocking around him dressed in typical Jimmy Buffett Island life apparel. He spent some time talking with the Today Show's Matt Lauer about his music, his influences, the love of his fans and how he and Matt seem to run into each other all the time. They finished off by comparing boat sizes before Jimmy sang Something ‘Bout a Boat.

Jimmy Buffett sang his classic hits live on the plaza on Thursday, August 15 as part of TODAY's Toyota Summer Concert Series. Whether you're watching the show from the plaza or from home - and there were many tweets with photos on twitter #BuffettTODAY. Check out the page for the fun photos.

Jimmy Buffet is a Key West favorite who is followed by many! His Parrothead fans come from all around the world to see him play! His carefree island music is a cultural part of tropical island themes from around the world.

to add your business to our Key West Party directory